It's 4:00 a.m. I've got the Dr. Hfuhruhurr Ale
I've got nothing to lose so I'm pissin' on the third rail
Groggy eyed and fried I'm headed for the station
D-Train ride Coney Island vacation
Dedicated to the boofers in the back of the 1 train
They'll be kicking out windows high on cocaine
Jump the turnstyle I lost my last token
Riding between the cars pissing smoking
Also finger popping
Two bums fucking I seen them rocking
Head for the last car fluorescent light blackout
Policeman told my homeboy put that crack out
You know you light up when the lights go down
Read the New York Post Fulton St. downtown
Same faces every day but you don't know their names
Party people going placed on the D-Train

French trench coat wing tip going to work
And you'll be pulling a train like Captain Kirk
Pick pocket gangsters paying their debts
Caught a bullet in the lung from Bernie Goetz
Overworked and underpaid staring at the floor
Prostitutes spandex caught in the ding dong doors
Stuck between the stations it seems like an eternity
Sweating like sardines in a flophouse fraternity
$50.00 fine for disturbing the peace
The neck tortoise the Lees creased
Hot cup of coffee and the donuts are Dunkin
Friday night and Jamaica Queens funkin
Elevated platform never gonna conform
Riding over the diner where I always get my toast warm
Bust into the conductor's booth and busted out rhymes
Over the loud speaker about the hard times
Sat across from a man readin El Diario
Riding the train down from El Barrio
Went from the station straight to Orange Julius
Bought a hot dog from my man George Drakoulias

Compra la canzone B-Boy Bouillabaisse: 59 Chrystie Street / Get On the Mic / Stop That Train / A Year and a Day / Hello Brooklyn / Dropping Names / Lay It On Me / Mike On the Mic / A.W.O.L. 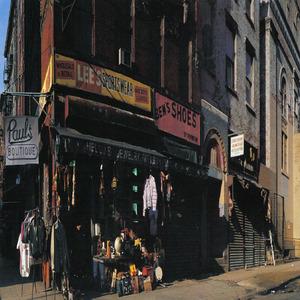