Dogs of war and men of hate
With no cause, we don't discriminate
Discovery is to be disowned
Our currency is flesh and bone
Hell opened up and put on sale
Gather 'round and haggle
For hard cash, we will lie and deceive
Even our masters don't know the webs we weave
One world, it's a battleground
One world, and we will smash it down
One world ... One world
Invisible transfers, long distance calls,
Hollow laughter in marble halls
Steps have been taken, a silent uproar
Has unleashed the dogs of war
You can't stop what has begun
Signed, sealed, they deliver oblivion
We all have a dark side, to say the least
And dealing in death is the nature of the beast
One world, it's a battleground
One world, and they smash it down
One world ... One world
The dogs of war don't negotiate
The dogs of war won't capitulate,
They will take and you will give,
And you must die so that they may live
You can knock at any door,
But wherever you go, you know they've been there before
Well winners can lose and things can get strained
But whatever you change, you know the dogs remain.
One world, it's a battleground
One world, are we going to smash it down?
One world ... One world 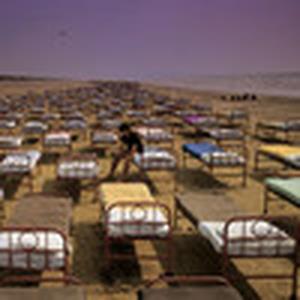 A Momentary Lapse of Reason (Remastered)